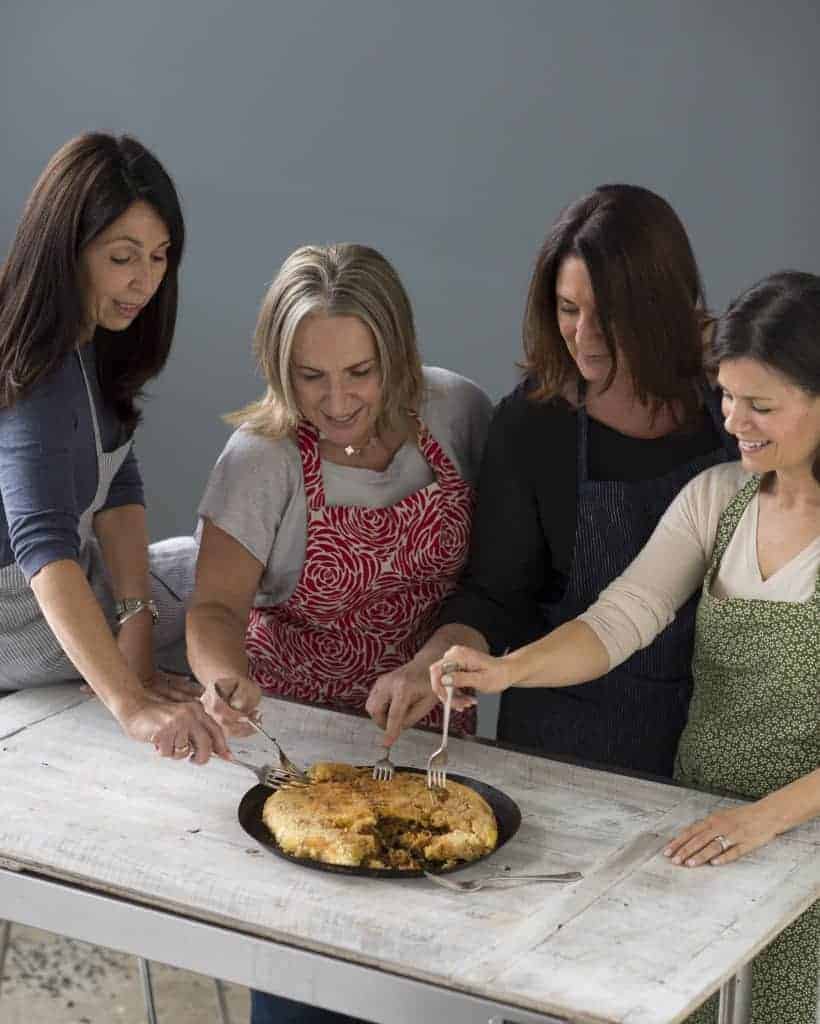 We are the MONDAY MORNING COOKING CLUB.

Six of us started cooking together every Monday morning in 2006. We are now four, and we are still cooking every Monday. And Tuesday! We have published three books, with the third released in March 2017.

We think of ourselves as our own little melting pot, which is reflected in the heart-warming and gorgeous books we have created. We all live in Sydney, Australia, but come from different backgrounds.

Merelyn comes from Perth, with Hungarian heritage. Jacqui started her life on the Sydney north shore with an English background. Lisa is from Melbourne, of Polish stock. Lauren immigrated as a child from Pretoria, South Africa. Natanya is a Sydney girl with Shanghai/Russian roots, and Paula is from Durban, South Africa, starting her life here as a newlywed. Lynn, who was with us 2014 – 2017, is from South Africa, having come to Australia just over ten years ago. More ideas, more cooking and more love!

Our mission at the start was to search out the best recipes from the best cooks in Sydney’s Jewish Community, leading to our first book Monday Morning Cooking Club. Our second book The Feast Goes On shares recipes and stories from Australia’s vibrant Jewish community. Our third book ‘It’s Always About the Food‘ celebrates the wonderfully diverse global Jewish community. We are currently working on a new book, due to be published in early 2020.

We wanted to share with the world our community’s unusually strong, somewhat obsessive, connection with food.

If someone is ill, chicken soup is promptly made and delivered.
If someone dies, eggs are boiled and bagels are bought.
No flowers are sent; a cake is baked.
If a baby is born, entire meals are prepared for entire families. It is always about the food.

And so we met every Monday morning – to chop and stir, mince and roll, roast and bake, fry and boil. We tasted and ate, laughed and debated, argued and agreed. We culled and vetted, tested and re-tested, and argued and laughed some more. The end result – a curated and fine-tuned collection of brilliant heirloom recipes and stories to share with the world and pass on to the next generation.

Over a chopping board and hot stove, with many cups of tea and the odd piece of cake, a unique bond began to form. We started out as a group of individuals and we are now a sisterhood.

Monday Morning Cooking Club is a not-for-profit group, and all profits from book sales go to charity.

This is the list of charities we have supported so far.

Lisa Goldberg: Lisa is now happily entrenched in the Monday Morning Cooking Club as Chief Pot Stirrer, a delicious change from starting professional life as a solicitor. It has been such a joy for her since 2006 to be with this truly amazing bunch of gorgeous women to produce and publish three extraordinary cookbooks.  She is a fresser with enormous (and sometimes unbridled!) passion for food and cooking. She hangs onto the part of Jewish culture which embodies the saying ‘it’s always about the food’. This project has changed her life and pushed her obsession with food to a whole new level.

Merelyn Chalmers: Merelyn has worked in public relations specializing in the food industry for over 20 years. She was a contributor for 2 years to the Sydney Morning Herald Good Food Shopping Guide. She brings to the team her passion for cooking and is thrilled by the broader community’s embracing of MMCC, its Jewish soul and its recipes. Merelyn loves sharing cooking tips and techniques, and teaching unconfident cooks how easy it is to create an impressive meal.

Natanya Eskin: Natanya started out as a primary school teacher and has worked on the MMCC project since its inception in 2006. She has developed a strong passion for uncovering and preserving recipes, especially from the older generations.
The best part for her is standing in the MMCC kitchen with the girls – the sisterhood – discussing and debating what to cook, laughing and sometimes crying together, working as a team to create something special for generations to come.

Jacqui Israel: Jacqui’s background is in teaching. A founding member of the group, her amazing organizational skills and record keeping has kept things running smoothly for the last 8 years. She has appeared at cooking classes and in-store events looking after marketing and sales.

The MMCC that was…

Lynn Niselow has a great passion for food, inspired by her mother and grandmother. She has enjoyed a diverse working life, ranging from fashion buyer through running a successful catering business to a community organisation executive. When this opportunity to be back in the food world arose in 2014, she grabbed it with both hands. She was very excited to be part of a sisterhood that cooks together and is inspired by the heirloom recipes and their stories. Lynn left MMCC to return full time to the workforce at the end of 2017.

Paula Horwitz: Paula, together with her husband Gary, created the Bay Swiss empire after arriving here from South Africa in the 1980s. Together they created a new innovated retail concept that combined food, furniture and homewares. Paula has been part of the group since 2007 and is particularly focused on the business side of the project. Paula was a founding member of MMCC and stepped back in 2014.

Lauren Fink: Lauren has always been a tireless charity worker and volunteer, and joined the group in its inception to focus on the charitable aspects of the project. She is greatly involved in the Jewish community and has great insight into its workings. She is an accomplished organizer and is a great asset in arranging MMCC events. Lauren was a founding member of MMCC and stepped back in 2014.

Could not authenticate you.